Munich, March 2021: The fully digitalized factory is not yet a reality in German mid-sized manufacturing firms. Around two out of three projects in the field of Industry 4.0 have not yet progressed beyond the planning phase. In addition, companies tend to only have individual applications that are not optimally linked to the value chain. This is the finding of Roland Berger’s new study "NextGen production", for which managers and specialists at medium-sized companies from five industries were surveyed. The survey also shows that 70 percent of the respondents wish to increase their investments in the next two years – on average, 20 to 30 percent of the total investment budget is earmarked for digitalization.

"Although digitalization is high on most German companies’ agenda, the digital factory is still in its infancy," says Oliver Knapp, Partner and Head of the Next Generation Manufacturing innovation platform at Roland Berger. "In most cases, the existing applications are single-case solutions developed for very specific tasks. This shows a lack of clear prioritization and corresponding strategies. As a result, mid-sized companies are not utilizing the potential to optimize their processes and thus improve their international competitiveness."

40 percent of digital projects exist only as an idea
As the study shows, the majority of Industry 4.0 applications are still in the early stages of the implementation process: 40 percent of projects exist as an idea and 25 percent are in the planning stage. Above all, skepticism regarding profitability makes decision-makers shy away from concrete measures. Where new technologies are already being used, company representatives cite improving processes (64 percent) and reducing costs (44 percent) as the main drivers for digitalization, followed by increased quality (24 percent).

Medium-sized companies lack a clear digitalization vision
One quarter of digitalization applications used today fall into the category of Big Data and AI analytics. In the future, this share is expected to grow to 29 percent. The second highest number of use cases (23 percent) come under the area of advanced automation and robotics. Its forecasted share in the near future is also expected to be 29 percent.

"The most successful companies today are already those that integrate digitalization into their existing value creation and do not set it up as a parallel, separate process," says co-author of the study Marc Bayer from Roland Berger. "There is no doubt that Industry 4.0 will completely transform industrial production. If companies want to survive, their digitalization approach should cover all aspects, from production equipment to workforce skills to strategic research partnerships."

In the study, the authors develop a target image that conveys the path to the digital factory based on five dimensions – looking at both technology and organizational structure. This includes the development of a digital ecosystem that defines networks beyond one's own company, as well as the digitalization of production systems and central manufacturing processes.

Roland Berger, founded in 1967, is the only leading global consultancy of German heritage and European origin. With 2,400 employees working from 34 countries, we have successful operations in all major international markets. Our 50 offices are located in the key global business hubs. The consultancy is an independent partnership owned exclusively by 250 Partners. 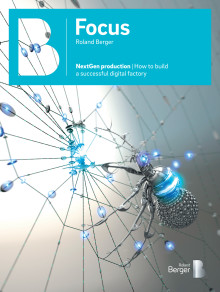